Know and Own Your Spine Health

The human spine, otherwise known as the vertebral column or backbone, forms the central part of the human skeleton.  It consists of multiple bones, the vertebrae, stacked on top of each other and separated by shock-absorbing intervertebral discs which provide flexibility to the vertebral column.    The spine can be divided into five parts, each with characteristic anatomy:
​ 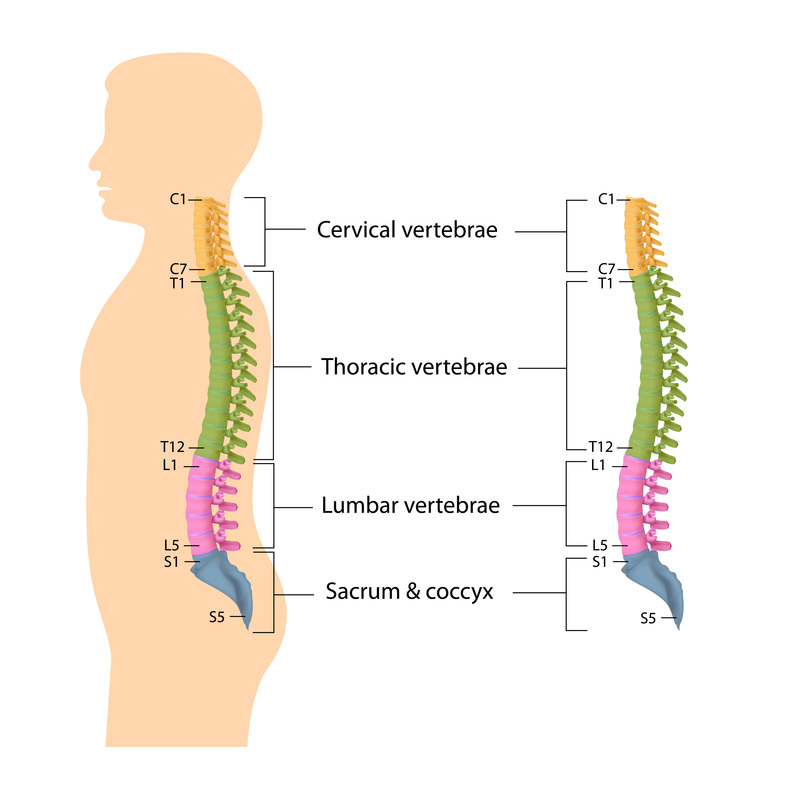 The complex structure of the spine allows for significant strength as well as great flexibility, whilst also providing protection to the fragile spinal cord and exiting nerves. Integrity of the human spine is necessary for upright posture and propulsion, as well as for movements of both upper and lower limbs(1).

The human lumbar spine typically consists of five vertebral bodies, L1 through to L5, which join with the pelvis via the sacrum at S1, and with the thoracic spine at the thoracolumbar junction (T12).  The lumbar spine possesses an anterior convexity, or lordosis and, as in the cervical and thoracic regions, individual vertebral bodies are separated by the cartilaginous, load-absorbing intervertebral discs. 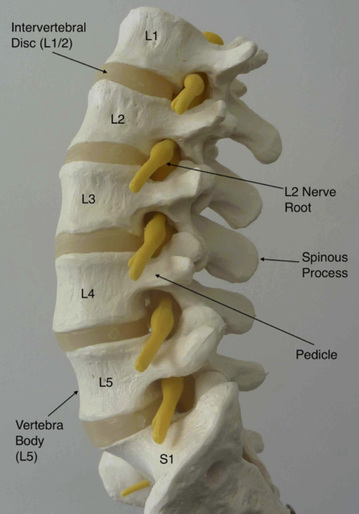 A typical vertebra consists of an vertebral body at the front (anterior) and a vertebral (neural) arch at the back (posterior).  Located between theses two parts is the vertebral foramen, which encases the neural elements; spinal cord or cauda equina (nerve roots) depending on the spinal level.  From either side of the vertebral arch bony transverse processes emerge at the side (laterally), whilst a single midline bony spinous process emerges posteriorly.

The lamina is the part of the neural arch between the transverse and spinous process, whilst the pedicle is that part of the arch anterior to the transverse process, which connects the arch to the vertebral body.   Adjacent pedicles together form intervertebral foraminae for exiting spinal nerve roots.  Where the lamina and pedicle meet, superior and inferior articular processes are present, which form synovial joints (facet joints) with matching processes of adjacent vertebrae. Lumbar vertebral bodies increase in size from superiorly to inferiorly and are generally kidney shaped(1).

Adjacent vertebral bodies articulate between their bodies via intervertebral discs and between their arches at the facet (zygopophyseal) joints.   A typical intervertebral disc consists of three parts, each essential to the normal functioning of the disc; cartilaginous endplates (CEP), annulus fibrosis (AF) and nucleus pulposus (NP).  Upper and lower surfaces of adjacent vertebral bodies are covered with a thin layer of hyaline cartilage, which forms the endplates.  The annulus fibrosis forms a peripheral ring of fibrous tissue, which connects adjacent endplates. Contained within the annulus is the central hydrated gelatinous core, the nucleus pulposus.  The anterior longitudinal and posterior longitudinal ligaments provide additional support to these vertebral body-disc spinal units.

Adjacent articular processes (superior and inferior) are joined to their companions via synovial facet joints.  The orientation of the facet joints dictates the movement which is able to occur in the lumbar spine.  Typically lumbar facet joints lie in an antero-posterior direction, which allows for freedom of flexion and extension, but limits rotation.  Lateral flexion, or abduction, is also possible in the human lumbar spine(1).

The intervertebral disc is a fibro-cartilaginous articulation between adjacent vertebrae, which has a central hydrated gelatinous core, the nucleus pulposus (NP).  Thin hyaline cartilage endplates are attached to each vertebral body and are united by an outer fibrous-cartilaginous ring, the annulus fibrosis (AF), which consists of concentrically lamellated collagen fibres (15 – 20 lamellae) surrounding the NP.  Small amounts of elastin interconnect lamellae providing strength and stability(2, 3).  Intervertebral discs function to facilitate movement and flexibility of the vertebral column, whilst also having the ability to recover from deformation following axial loading.

Excluding water, the predominant extracellular matrix components of the disc are proteoglycans (PG) and collagen.  The NP consists of predominantly type II collagen, whilst the AF consists of predominantly type I collagen, with type II collagen becoming increasingly present in its inner aspect(4, 5).  Other collagen types (III, IV, V, VI, IX, X) are present in smaller amounts(5).
​
The NP contains high amounts of proteoglycans, which confer osmotic properties to increase the water content of the NP(6).  This imbibition of water is critical to normal disc function allowing the disc to resist compression, recover from deformation and transmit loads axially to the annulus(1).  The major proteoglycans consist of a protein core with several hundred glycosaminoglycan (GAG) chains of chondroitin sulfate and keratan sulfate, which interact with hyaluronan, forming large macromolecular aggregates called aggrecans (Figure 1.8)(6, 7).  These aggrecans are entrapped within the collagen type II fibres of the disc.  Aggrecans create an osmotic pressure causing an influx of water molecules into the NP, and thus, have a major role in the load bearing capabilities of the disc.  Decorin, biglycan, fibromodulin, keratocan and lumican, which are members of the small leucine repeat proteoglycans (SLRP) family, are also present in the disc and have important matrix linking and matrix organising roles, as well as regulating cell proliferation and cellular response to cytokines and growth factors(3, 8).  The NP proteoglycan content, and thus water content, decreases with increased age and disc degeneration(9), whilst SLRP proteoglycan fragmentation can also occur effecting other aspects of disc metabolism(10).

The native cell population of discs represents approximately 1% of the disc tissue but is pivotal in maintaining disc metabolism, matrix production and remodelling(2, 11).  Cells of the NP and inner AF demonstrate chondrocytic morphology whilst cells in the outer AF are more fibroblastic (Figure 1.9)(12, 13).

The healthy adult disc is essentially avascular and aneural except for at the periphery of the annulus, thus creating a hostile low oxygen and low pH environment for resident cells.   Such cells rely on diffusion of substances across cartilaginous endplates for nutrients and metabolic exchange(2).